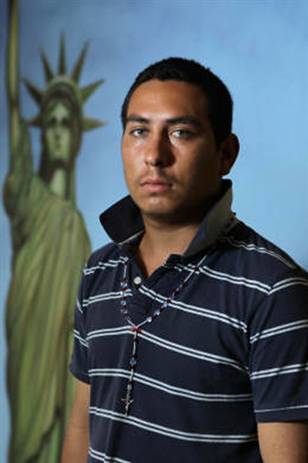 An American citizen was recently removed from the United States because of a lack of proficiency in English. Arizona law 1070 authorizes a local law enforcement to detain and question individuals that are suspected of being in the United States unlawfully.

The big question is how an officer determines who is here unlawfully. Will this be done through accents or the color of their skin?

An example of how the Arizona law opens law enforcement to racial profiling and discrimination happened in Texas to Luis Alberto Delgado, a U.S. Citizen born in Texas.

Due to his parents' divorce, he moved with his mother to Mexico, where he was raised before coming back to live in the U.S. As a result, he does not speak proficient English.

Upon a traffic stop for a seat belt violation, Luis and his brother were investigated by U.S. Border Patrol to determine their status. Luis was carrying his U.S. birth certificate, social security card, and a Texas ID. His brother had additional documentation which consisted of an application for a U.S. Passport and selective service registration. Luis's brother was released.

DEPORTATION ORDEAL
Luis, a Houston native, was questioned by U.S. Border patrol for eight hours. They did not believe that his U.S. Birth certificate was legitimate. Under intense interrogation and pressure, Luis felt pressured to leave the U.S. voluntarily under an order of voluntary departure. This did not allow Luis to freely leave the detention of U.S. Border Patrol.

He was taken to Matamoros, Mexico, where he spent three months before an immigration attorney that handled the case pro bono secured Luis' repatriation to the U.S.

Luis is an example of what will happen, among other things that will go tragically wrong with Arizona-type immigration measures which are the result of xenophobia, ignorance, and flat out racism. These measures open the flood gates to abuse and the infringement of Americans' right to privacy, especially those that fit the illegal immigrant profile.

Hopefully, this deplorable incident will give overly zealous, vote-hungry politicians pause before making anti-immigrant proposals part of their platforms.